Are you looking to book Drake to perform at your next event or to be your next brand? Then look no further, because Talent Connect is here to make the connection.

Our organization has established well-founded services that aim to help you promote your business, brand, services, and products via celebrity endorsements. As the premier entertainment booking structure in the industry, you can count on our unparalleled influence and reach to deliver optimal results. Talent Connect facilitates your requests directly to the artists’ management teams while providing top tier VIP treatment to our clients.

While Talent Connect does not directly represent the artists, we do have prominent business ties that we utilize to spark connections between our clients and artists.

Among other popular acts, we can secure a connection for you with Canadian superstar, Drake. Massively famous for his singing, rapping, songwriting, acting, and entrepreneurial prowess, Drake has become one of the most popular figures in the global music scene. 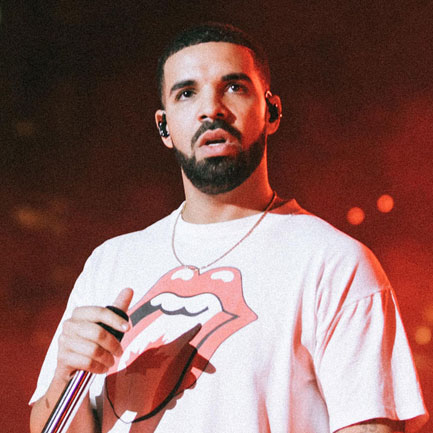 Hailing from Canada, Drake is one of the most prominent artists in the music world. He first set foot in the entertainment industry when he starred in the youth-oriented drama TV series, Degrassi: The Next Generation. Transitioning from acting into a more musically-inclined career, the actor released his debut mixtape, Room for Improvement, in 2006. After launching two more independently produced mixtapes, Drake signed a record deal with Young Money Entertainment, a record label founded by American rapper, Lil Wayne.

Drake debuted his first studio album, Thank Me Later in 2010, which soon climbed to the number one spot of the US Billboard Hot 100. His second studio album, titled Take Care, was launched in 2011 and achieved massive success. The same applied to his third studio album, Nothing Was the Same, in 2013.

The singer’s success just continued to multiply with every endeavor that he embarked on as his fourth studio album, Views, reigned at the top of the Billboard 200 chart for 13 non-consecutive weeks. The feat officially made Drake the very first male soloist to achieve the milestone.

While all his work became exceptionally popular among critics and fans alike, one of his most notable songs is Toosie Slide, the lead single of Drake’s third commercial mixtape, Dark Lane Demo Tapes. The track with matching dance moves rapidly became a popular craze that took the internet by storm. Consequently, the Toosie Slide challenge grew into a viral sensation that was prevalent on every social media platform.

Aside from being an immensely successful musician, Drake is also an entrepreneur. In 2012, he co-founded OVO Sound, a Toronto based recording company.

Recognised by the RIAA as the highest certified digital singles artist in the US, Drake has sold over 170 million records worldwide, and counting. Furthermore, he has a large collection of accolades in his repertoire, such as four Grammys, six American Music Awards, three Juno awards, two Brit Awards, and 27 Billboard Music Awards.

Winning one award after the other with his record-breaking music, Drake is definitely one of the most distinguished entertainers in the world.

How can I book Drake?

Talent Connect consists of a professional team of booking agents who are dedicated to providing high quality services that connect clients and reputable artists, such as Drake.

If you would like to book Drake for media appearances, private occasions, influencer marketing projects, corporate events, non profit events, or speaking engagements, you can count on Talent Connect to seamlessly make the arrangements for you.

It is our foremost purpose to provide you with comprehensive information on artists’ availability and booking fees. Give us a call or reach out via email to learn more about our services or for further assistance regarding your booking queries.

How can I get in touch with Drake for media inquiries?

Connecting with artists like Drake, is easier and more convenient than ever thanks to the influential reach of Talent Connect. With our outstanding booking services, we are properly equipped to yield optimal results to our valued clients. Reach out to Talent Connect for updated information on scheduling, booking fees, and other booking-related details.

Reaching out directly to Drake’s management is one method to communicate your requests, but it does come with a few setbacks. To ensure a smooth and quick translation, let Talent Connect do the heavy lifting for you.

At Talent Connect, we certify consistent and efficient results, so you won’t have to worry about making all the arrangements on your own. Give us a call today for more information on our artist booking services.

What is Drake’s booking fee?

If you want to book Drake for your brand endorsements or upcoming events, there will be a number of factors to take into account before finalising any booking fees. This entails elements such as scheduling and the type of event you have in mind.

Reach out to Talent Connect for comprehensive information on booking prices and other essential details about Drake or other high calibre artists to make your next event monumental.