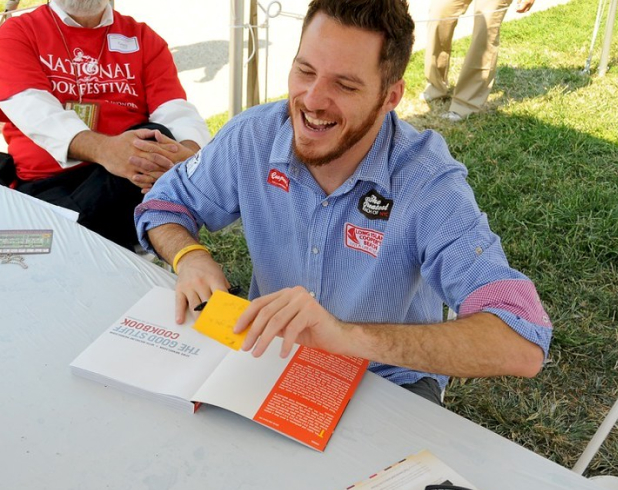 Spike Mendelsohn is a highly-accomplished chef and restaurateur based in Washington, D.C. On top of being the owner of multiple restaurants, he is also famous for being the fifth-place finisher of Top Chef, during the 2008-2009 season. Iron Chef America and Bar Rescue are just a few of the other shows he’s made appearances on.

The celebrity chef showed off his writing chops with the release of The Good Stuff Cookbook.

With over 32K followers on Instagram and over 50K followers on Twitter, it’s clear that Spike Mendelsohn is one of the most notable and influential chefs of today.

Have you been searching for a reliable agency to obtain Spike Mendelsohn’s contact information for event and campaign bookings? Talent Connect is here to assist you. While we don’t directly represent the public figures in our ever-growing pool of contacts, we specialize in connecting companies and organizations with top celebrities. By leveraging our industry experience and expertise, you can easily get in touch with Spike Mendelsohn’s agent or manager.

Spike Mendelsohn, who is of Greek and Jewish ancestry, was born on December 15, 1980, in Montreal, Quebec. Eventually, his family moved to Florida, where they operated Pepin restaurant until it was sold some years later.

It was in this environment that Spike Mendelsohn’s love for cooking started. On top of working as a busboy and dishwasher for the family business, he also worked as a cook when the restaurant was short-staffed. In 2005, Spike Mendelsohn graduated from the Culinary Institute of America and proceeded to work for various culinary chefs.

Spike Mendelsohn’s TV debut happened when he starred in Bravo TV’s Top Chef: Chicago (2008). It was evident that he was on the rise to celebrity status with his subsequent appearances on Top Chef: All Stars (2010) and Life After Top Chef (2012).

The following year, Mendelssohn became a regular guest on CBS The Early Show. Within the same year, he competed in CBS’s Next Iron Chef: Super Chefs and Next Iron Chef: Redemption. Soon he became an in-demand celebrity guest and appeared on shows like The View, Good Morning America, The Queen Latifah Show, and more.

Media appearances aside, Spike Mendelsohn’s family is the owner of Sunnyside Restaurant Group which includes well-known establishments like the Good Stuff Eatery, We The Pizza, and Santa Rosa Taqueria.

How can I book Spike Mendelsohn?

With Talent Connect, you can easily get in touch with well-known personalities and celebrities. If you’re looking to obtain Spike Mendelsohn’s contact details, we’re here to assist you. Our expert team is here to kickstart all your celebrity bookings, whether it’s for media appearances, private parties, or corporate events.

How can I get in touch with Spike Mendelsohn for media inquiries?

The majority of celebrities are open and receptive to media inquiries. However, establishing a reliable connection isn’t always easy if you aren’t assisted by the right team. Talent Connect is here to make sure that you don’t run into obstacles like this. We’ll help you get in touch with Spike Mendelsohn’s agent or manager so that you can take the next steps to work with this top-notch celebrity.

Usually, the management teams of celebrities are open to considering opportunities from businesses and organizations. Communication gaps, however, can hinder your event or campaign plans.

Obtaining incorrect contact information from an unreliable source or your messages/emails getting overlooked are just a few of the common obstacles involved in celebrity bookings. Our team at Talent Connect will only provide the most updated contact information so you can quickly establish the connection you need.

What is Spike Mendelsohn’s booking fee?

Similar to other celebrities, Spike Mendelsohn’s booking price varies depending on the following factors:

As an added note, other expenses (e.g. travel, hotel, and transportation costs) may not be included in the basic rate. To learn more about Spike Mendelsohn’s booking price, reach out to our team today!