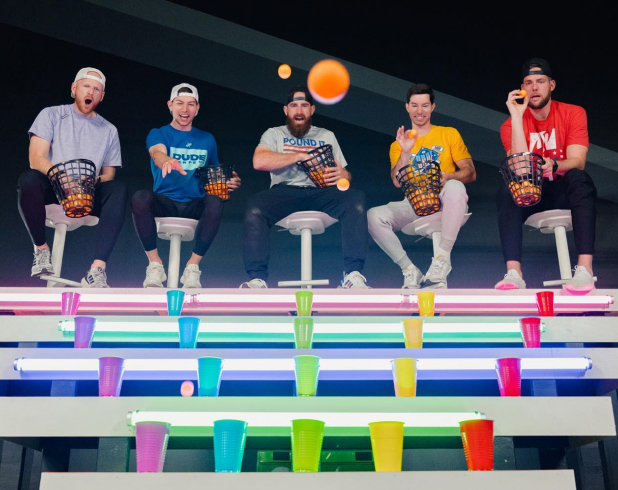 Dude Perfect is a sports and comedy group based in Frisco, Texas, USA. The popular content creation ensemble consists of former college roommates, Tyler “TT” Toney (Beard), Garrett Hilbert (The Purple Hoser), Cody Jones (Tall Guy), and siblings Cory and Coby Cotton (Twins). Established in 2009, the quintet holds the record for the second most subscribed sports channel on Youtube. The group made waves on the internet with their videos that focus on trick shots and stunts; raking in millions of views from audiences all over the world.

With nearly 55 million subscribers on Youtube and 11.2 million followers on Instagram, Dude Perfect is perfect for your next event or campaign.

If you are looking to book Dude Perfect for your events or campaigns, Talent Connect is here to make it happen! While our agency does not directly represent our vast and diverse pool of celebrity contacts, it is our team’s objective to help you get in touch with Dude Perfect’s agent or manager. Talent Connect is dedicated to assisting you to achieve promotional success for your business, product, or services via celebrity endorsements from famous personalities like Dude Perfect. You build the campaign, and we’ll spark the connection. 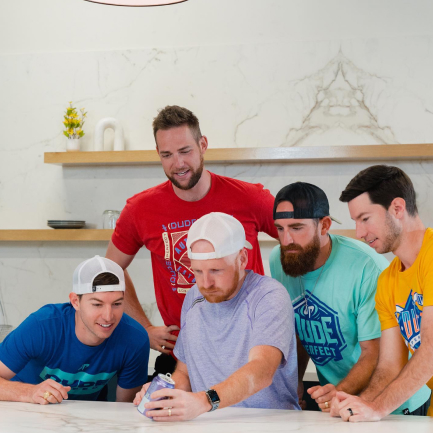 Dude Perfect is an entertainment, sports, and comedy group launched by Tyler Toney, Garrett Hilbert, Cody Jones, Cory Cotton, and Coby Cotton. The squad of friends took their fist step into internet stardom when they uploaded a video of themselves performing trick shots at a ranch. Within a mere week of its release, the video gained a massive popularity with 200,000 views. Following the success of their debut video, the quintet didn’t waste any time to release their second clip. Pledging to sponsor a child from Compassion International for every 100,000 views the video received, Dude Perfect amassed an impressive 18 million views. Thanks to their act of generosity, it was evident that the ensemble of Youtubers were out to contribute a positive change to the world by means of entertainment.

Proceeding to produce a slew of viral content that took the world by storm, Dude Perfect embarked onto business ventures, such as professional endorsements and collaborations. This includes their work with former Sacramento Kings player, Tyreke Evans, and their appearance on Rob Dyrek’s “Fantasy Factory”. Dude Perfect has collaborated with other sports industry heavyweights, like Green Bay Packers’ quarterback, Aaron Rodgers and NBA star, Chris Paul. showcasing their versatility in various fields, the guys of Dude Perfect joined forces with Actor, Paul Rudd and Singer, Tim McGraw.

In 2011, the band of Youtubers, delved into the enterprise of technology by devising a free self-titled mobile game application for iOS and Android. They followed this feat up with more games, titled “Dude Perfect 2”, “Endless Ducker”, and “That’s Lit”.

With trick shots being at the heart of their digital content, Dude Perfect scored a myriad of world records, such as their 2009 record for the longest basketball shot, which they made from the fourth deck of Kyle Field. They also hold the record for the longest barefoot Lego walk and longest pea blow. In 2019, they broke the world record for most ping pong balls stuck to a person’s head using shaving cream and the most donuts stacked on top of each other while blindfolded. Their most recent milestone was achieved in 2020, for the most beach ball header passes in 30 seconds.

Consolidating their secrets to success in one brilliant book, Cory Cotton authored “Go Big: Make Your Shot Count in the Connected World”. The book’s focal point was an extensive recount of the group’s learnings and efforts in establishing a business in a world that is dominated by social media. The inspirational book is a fantastic self-help guide for anyone seeking a spark of inspiration to follow their dreams and  build their vision.

How can I book Dude Perfect?

Talent Connect’s goal is to connect you with reputable Youtube personalities, like Dude Perfect, in order to book them for a vast variety of business engagements, such as media appearances, brand endorsements, corporate events, private parties, speaking engagements, and more. If you would like to book Dude Perfect, one of the most popular digital content creators in the world, our team will be happy to help you!

How can I get in touch with Dude Perfect for media inquiries?

While most popular Youtube icons, like Dude Perfect are keen on responding to media inquiries, you may encounter a few roadblocks in making a successful connection. The most common obstacle is obtaining inaccurate or outdated contact information. Talent Connect is here to ensure that you are protected from these inconveniences with our top quality services and reliable industry contacts. Book Dude Perfect for various media appearances, such as virtual events, TV appearances, podcasts, magazine articles, and more!

The management of Youtube creators and celebrities are very open towards opportunities from businesses and organizations. However, communication gaps are unpredictable and can occur any time. By having inaccurate contact information or catching them during a busy time, messages could accidentally be overlooked. If you need to contact Dude Perfect’s agent or manager fast and efficiently, our experienced team of professionals can make all the necessary arrangements for you. Talent Connect combines expertise in connecting celebrities to our clients with a vast pool of industry contacts to spark the connection you are looking for. Reach out to our office today for comprehensive booking details.

What is Dude Perfect’s booking fee?

Much like most content creators and celebrities, Dude Perfect’s booking fees may vary depending on a variety of factors, including:

There may also be supplementary costs that are not included in the flat rate. This includes transportation expenses and hotel accommodations. For more information about Dude Perfect’s booking fees and schedules, please feel free to contact our team.