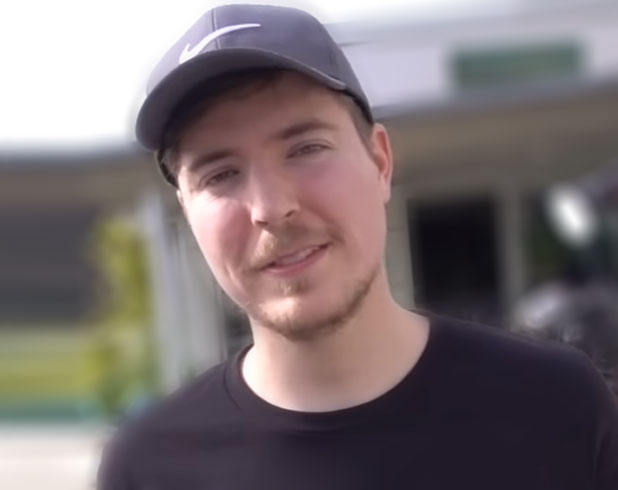 Mr. Beast, also known as Jimmy Donaldson, is a famous Internet personality, professional gamer, Youtuber, and philanthropist. He is well-known for pioneering Youtube content that is centred on expensive stunts and pushing the definition of what it means to be a “YouTuber”. With each video, he tries to make the world a better place while keeping his audience entertained. Most recently, he founded #teamtrees to plant over 20 million trees, started his own Burger Chain called Mr. Beast Burger, and created a viral app/contest call “Finger on the App”. He has various channels on Youtube with over 65 million subscribers and 9.3 billion total views combined.

Looking to book Mr. Beast for a brand endorsement, private party, corporate event, and so on? Talent Connect is here to help!

We are a top-tier talent booking agency based in the heart of Toronto, Canada. Although we do not represent our pool of celebrity contacts directly, you can rely on our committed team to help you get in touch with Mr. Beast’s agent or Mr. Beast’s manager. In addition, we can also create a custom marketing strategy or campaign between your brand and the influencer or celebrity. You plan the campaign, we’ll make the connection. 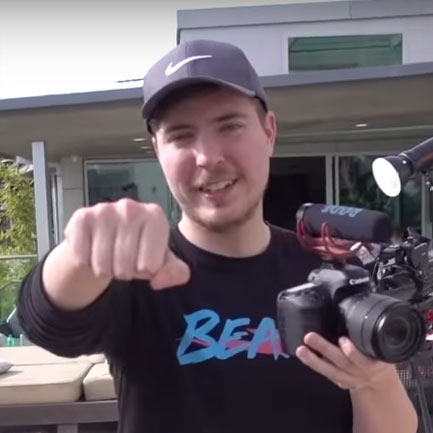 Jimmy Donaldson, better known by his online alias Mr. Beast, was born on May 7, 1988, in North Carolina, United States. In 2011, when he was 13 years old, he began posting videos on YouTube under the handle, MrBeast6000. He began by posting random videos. Later on, he gained attention with his video series titled, “ Worst Intros on YouTube” – and he became even more popular as he published game-related videos.

His first-ever game-related video involved him playing Minecraft. This video was reuploaded in 2015 under his channel, MrBeast, and was titled MrBeast6000’s First Video. Even in early videos such as this, Mr. Beast’s charisma, laid-back nature, and effortless sense of humour shone. However, his early videos gained a relatively lower average number of views of about a thousand.

His YouTube views skyrocketed with the release of his 2017 video titled, “I Counted to 100000!”. The stunt took him around 40 hours to complete, with parts of the video sped up so that it could be uploaded. This video gave him tens of thousands of views within just a matter of days. And with that, Mr. Beast introduced a unique content format on YouTube that featured attention-grabbing stunts and challenges.

Since then, he has done even more memorable stunts – such as the following: staying underwater for 24 hours, breaking glass using only megaphones, putting 100 million orbeez in a friend’s backyard, building the world’s largest lego tower, and more.

Mr. Beast remains active on a number of channels, where he uploads stunts, challenges, reaction videos, gaming videos, and shorts. These channels include:

Such quality video content did not go unnoticed. In 2019, Mr. Beast won the 9th Annual Streamy Awards for the category of Breakout Creator. 2020 was an even better year for Mr. Beast as he won multiple awards in the 10th Annual Streamy Awards for the following categories: Creator of the Year, Live Special, Social Good: Creator, and Social Good: Nonprofit or NGO. He also received the Youtuber of the Year in the 12th Annual Shorty Awards.

Mr. Beast currently has a total of 65.6 million subscribers and a total of 9.3 billion combined views.  But alongside Mr. Beast’s massive success as a YouTuber, he is also a man on a mission.

In 2019, Mr. Beast organized a collaborative fundraiser which was called #TeamTrees. The concept of #TeamTrees is that for every dollar donated, a tree is planted. Originally, the goal was to raise 20 million dollars for this cause and to plant an equal number of trees.

However, #TeamTrees is only in its second year and has already surpassed the original goal- now having 22.4 million dollars. On top of donations coming in from the large fanbase of Mr. Beast, the project has also received large sums from the likes of Elon Musk, Jack Dorsey, Susan Wojcicki, Tobias Lütke, and many others.

How can I book Mr. Beast?

Talent Connect is here to help your business or organization connect with the biggest names for different kinds of engagements – such as media appearances, brand endorsements, corporate events, private parties, and so on.

If you would like to book Mr. Beast, one of the most globally influential Internet personalities out there, we can make it happen!

How can I get in touch with Mr. Beast for media inquiries?

Though many top celebrities are typically open to considering different kinds of media inquiries, there are often numerous challenges in getting connected properly. You may stumble across false/outdated contact information, messages may get lost in a flurry of other inquiries, and so on.

We can help you bridge such gaps so that you can get a high-calibre Internet star like Mr. Beast for virtual events, podcasts, TV appearances, magazine feature articles, and more!

The management of top celebrities is oftentimes open and receptive towards opportunities for their celebrity. However, there are certain blocks that might get in the way – such as unintentionally overlooked/spammed messages, outdated contact information, busy schedules, and so on.

We have many years of experience in connecting with top celebrities and influencers. Our dedicated team can do the work for you and help you with your goals.

We also offer a comprehensive packaged service that you won’t find anywhere else.

If all you need is contact with Mr. Beast’s agent or Mr. Beast’s manager, we can do that for you. But in addition, we can also craft and execute a custom marketing campaign for your business, involving the celebrity of your choice!

What is Mr. Beast’s booking fee?

Mr. Beast’s booking price can vary depending on certain factors like:

There may also be additional expenses related to the celebrity’s travel costs, hotel costs, and transportation to the venue location for in-person events.

With our expertise, we will be able to clearly define all those costs for you and negotiate to get you the best prices. If you’re curious about what we can do for you, getting started is easy!

Simply tell us more about the engagement that you need from Mr. Beast (e.g. for an event, party, media appearance, brand endorsement) and we’ll be in touch with you!