Arguably the most famous animal trainer in the world right now, Kody Antle earned his popularity through his videos of showering with chimps, nursing tiger cubs, and swimming with tigers.

Don’t be surprised, this real-life Tarzan grew up with monkey and tiger cubs in his crib!

As the son of another popular animal trainer, Bhagavan “Doc” Antle, who is the Head of Myrtle Beach Safari and a prominent character in the Netflix documentary series “Tiger King,” Kody is constantly among exotic animals.

About 29 million animal lovers follow him on TikTok for his funny and adorable animal videos. That’s quite the exposure if you decide to book him for your next campaign!

Getting in touch with Kody Antle is easy through Talent Connect! Our well-connected booking agency can help you reach Kody Antle’s agent or manager to get started on your next campaign.

While our agency does not directly represent these celebrity contacts, we can connect you to their management team and assist you throughout the process. We can even help create your campaign strategy!

Hassle-free celebrity bookings and endorsement deals are made possible with Talent Connect. 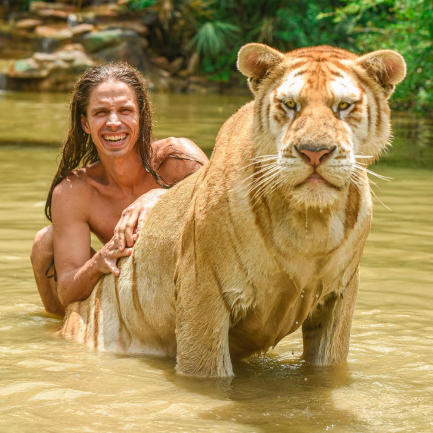 Kody Antle is an animal trainer famous for having been raised in a wildlife park. His father, Doc Antle, is the founder of The Institute for Greatly Endangered and Rare Species (T.I.G.E.R.S.).

Known as the real-life Tarzan because of his upbringing, Kody grew up working with the animals at his father’s reserve, the Myrtle Beach Safari, where he also learned how to train animals.

Because of his unusual lifestyle, which he regularly shares through videos and photos on his social media accounts, Kody has earned 29 million followers on TikTok, 4.6 million on Instagram, and 856,000 on Facebook.

His adorable connection with the animals has helped promote the reserve, where he has given numerous wildlife tours himself. Fans are amazed by the unlikely bond between Kody and the animals, especially with the tigers and chimps, whom he constantly refers to as his “brothers and sisters.”

How can I book Kody Antle?

Talent Connect can help you book popular public figures like Kody Antle for a variety of engagements. This includes media appearances, brand endorsements, corporate events, private parties, speaking engagements, and more. Just send us a message and our team will connect you to Kody Antle’s agent.

How can I get in touch with Kody Antle for media inquiries?

You can reach Kody Antle’s manager or agent for media inquiries through our team. We’ll establish a reliable connection—so you don’t have to deal with the hassles of miscommunications or incorrect contact information.

You might find it difficult to get to Kody Antle’s management team through typical means. That is, looking for Kody Antle’s manager’s contact info by yourself, trying to get past several layers of security to talk to his agent, and attempting to get an appointment out of their very busy schedule.

If you need to contact Kody Antle’s agent or manager ASAP, drop a message and Talent Connect will do the legwork for you.

What is Kody Antle’s booking fee?

Kody Antle’s booking fee varies depending on a number of factors such as:

In addition to his booking fee, we will also factor in travel expenses, hotel accommodations, and transportation for in-person events. You may reach out to our team for more information on Kody Antle’s booking price.