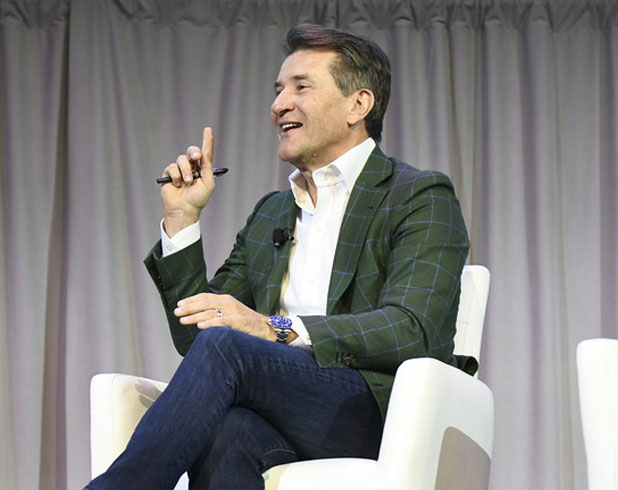 Robert Herjavec is a business mogul, TV personality, and author who’s gained popularity for his work on the TV shows Dragon’s Den and Shark Tank. Herjavec also appeared as a contestant, alongside Kym Johnson, on the 20th season of Dancing with the Stars in 2015, where the duo finished in 6th place. The Herjavec Group CEO currently has over 718k followers on Instagram.

For celebrity bookings that are efficient and hassle-free, Talent Connect is your go-to source. We’ll kickstart the process for business, products, service endorsements, and more. Our team is not a direct representation of the public figures in our vast database, but we can establish a reliable connection between you and Robert Herjavec’s agent or manager.

Before Robert Herjavec became the business mogul that he is today, he worked various jobs such as newspaper delivery, waiting tables, and debt collecting to make ends meet. Thanks to his hard work, it wasn’t long before he became the General Manager at Logiquest.

Though he was fired from Logiquest in 1990, it soon proved to be a blessing in disguise. This made way for the establishment of his own internet security software integration company, BRAK Systems. By 2000, Herjavec sold his company for a whopping $30.2 million. His next entrepreneurial project, The Herjavec Group, was established three years later. Today, it is known as a global cybersecurity operations leader and one of the world’s fastest-growing technology companies, worth over $200 million.

Aside from his massive success as a businessman, Robert Herjavec has also gained widespread popularity as a TV personality. The investor starred on the TV show Dragons’ Den from seasons 1 to 6 and currently appears as one of the “main sharks” on ABC’s Emmy award-winning show Shark Tank.

His inspiring books Driven, The Will to Win, and You Don’t Have to Be a Shark: Creating Your Own Success, have all become bestsellers. Through his work, Robert Herjavek continues to inspire his audience with tips and tricks on how to achieve financial success.

How can I book Robert Herjavec?

How can I get in touch with Robert Herjavec for media inquiries?

Getting in touch with Robert Herjave’s agent or manager for media inquiries is made easy with Talent Connect. If you want to reach out to Robert Herjavec for a wide range of media appearances, including magazine feature articles, virtual events, podcasts, or TV appearances, our team has got you covered. Contact us to get started!

Talent Connect will help you avoid communication failures and other booking process hassles that could be a cause of delay for your event or campaign. Our team will swiftly connect you with Robert Herjavec’s management team. Get in touch with us for more details.

What is Robert Herjavec’s booking fee?

Travel expenses, transportation for in-person events, and hotel accommodations are some of the other costs that would also need to be accounted for in addition to the flat booking fee. To know more about Robert Herjavec’s contact info and booking rate, reach out to the Talent Connect team!