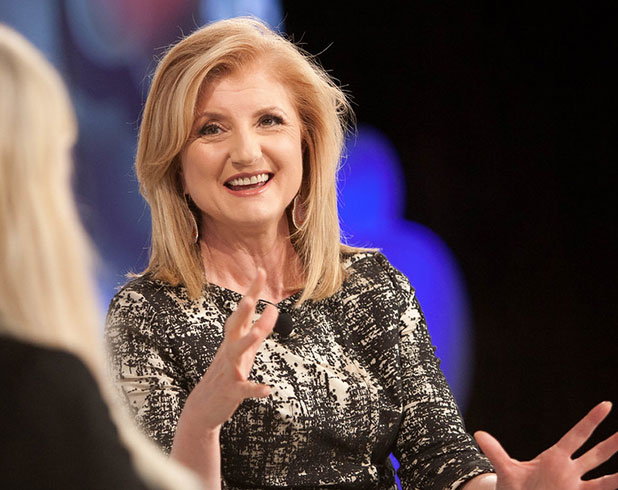 Arianna Huffington is an accomplished author and the CEO of “Thrive Global”. Through this platform she encourages people to embrace a lifestyle that’s geared towards thriving rather than just “living”. With 2.8 million followers on Twitter and 720k followers on Instagram, Arianna’s vision is a breath of fresh air to her audience in the sometimes foggy world of social media. If your brand has a similar vision, teaming up with Arianna Huffington will get your message across to a massive key demographic.

Booking Arianna Huffington for your event or campaign starts right here! Talent Connect has all the resources you need to make a reliable connection with Arianna Huffington’s agent or manager. Our team does not directly represent the personalities in our vast database, but we’ll make sure to get you in touch with her management. Assisting companies in booking public figures for business, product, or service endorsements is our strong suit. 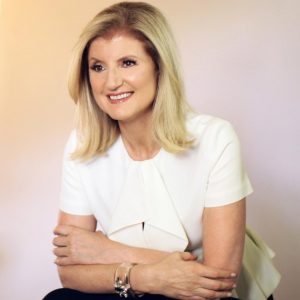 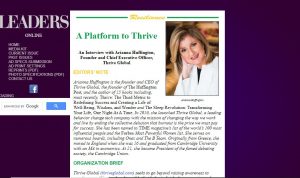 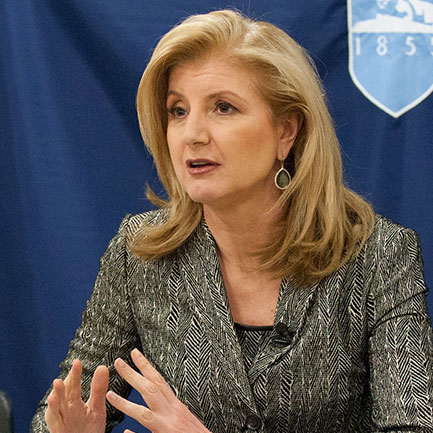 Arianna Huffington was born in Athens, Greece on July 15, 1950. She studied economics at Girton College in Cambridge, where she became president of the Cambridge Union Society debating team.

Arianna started writing books in the 1970s and released her first book “The Female Woman” in 1973. She has released a total of 15 books since including “Thrive: The Third Metric to Redefining Success and Creating a Life of Well-Being, Wisdom, and Wonder”, which debuted at #1 on the New York Times bestseller list in 2014.

Some of her other works include biographies such as “Maria Callas – The Woman Behind the Legend” and “Picasso: Creator and Destroyer”. Arianna Huffington also lent her writing skills to publications such as “National Review”. Aside from being an author, she’s an accomplished host too. Shows like BBC1’s “Saturday Night at the Mill”, “Left, Right, & Center”, and “Both Sides Now with Huffington & Matalin” are among her extensive credits.

Arianna Huffington solidified her status as a media mogul when she co-founded “The Huffington Post” in 2005. The publication, which is mainly a commentary outlet, blog, and news site, went on to be one of the world’s most popular media brands. In 2011, Arianna became the editor-in-chief of The Huffington Post Media Group. The following year, the outlet won the prestigious Pulitzer Prize for national reporting

After stepping down from her position at “The Huffington Post” in 2016, Arianna launched a new start-up called “Thrive Global”. The company’s goal is to help people fight stress and prevent burn-out through science-based solutions. Arianna became the host of the “Thrive Global Podcast” created in partnership with iHeart Radio in 2017. The “Meditative Story Podcast” is among the enterprise’s other ventures that blends stories, meditation, and original music to engage its audience.

Arianna serves as one of the board of directors for companies like “Uber”, “Onex Corporation”, ”Berggruen Institute”, and the “Center for Public Integrity”. Because of her impressive work, she was included in Oprah’s 2016 SuperSoul100 list of visionaries and influential leaders. Her influence began crossing over into the Hollywood scene when she participated in the animated series “The Cleveland Show” in 2008 and the sitcom “How I Met Your Mother” in 2010.

Arianna Huffington actively uses her social media platforms to spread positivity and inspire her followers to take charge of their lives and push towards their goals. Thanks to all of her achievements and extraordinary vision, Arianna Huffington has become one of the world’s most prominent media figures.

How can I book Arianna Huffington?

If you’ve been looking for a way to contact Arianna Huffington’s agent or manager, this is the place to be. Reach out to us and we’ll jump-start your brand endorsements, media appearances, corporate events, speaking engagements, or private parties. Talent Connect will help you book Arianna Huffington for your event or campaign.

How can I get in touch with Arianna Huffington for media inquiries?

Reaching out to famous authors and CEOs doesn’t have to be difficult. At Talent Connect, we make sure you don’t have to face the hassles caused by false or outdated information. Booking public figures is straight-forward with the help of our team’s reliable contacts. Get in touch with us to start the booking process for media appearances like magazine feature articles, virtual events, podcasts, and TV appearances. Our team will help you get in touch with Arianna Huffington’s agent or manager.

The biggest obstacle brands face when trying to book a public figure is a failure of communication. This ends up causing huge delays for your event or campaign. With Talent Connect, you can rest assured that we’ll get you in contact with Arianna Huffington’s agent or manager. Our network of reliable industry contacts makes the booking process quick and simple.

What is Arianna Huffington’s booking fee?

Arianna Huffington’s booking rate depends on factors such as:

Additional costs like travel expenses, hotel accommodations, and transportation for in-person events are some of the other fees that may be added to the flat booking rate. Reach out to Talent Connect for more information on Arianna Huffington’s booking details!