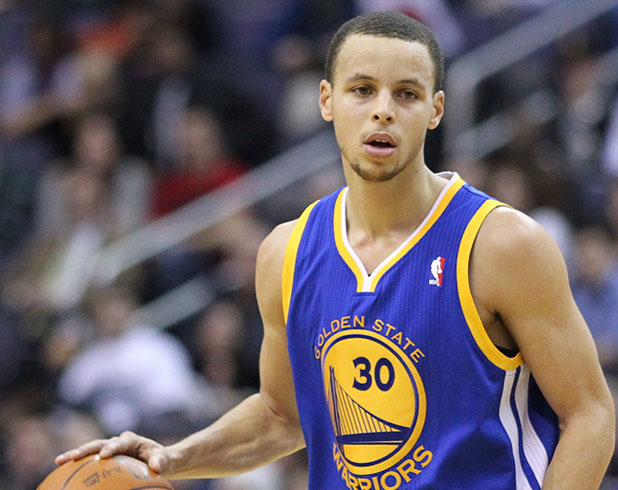 A highly respected and acclaimed athlete like Stephen Curry can help increase brand awareness and boost brand equity with an extensive reach. Stephen Curry is one of the biggest names in modern basketball. Throughout his career as a professional basketball player, he has won 3 NBA Championships and 2 NBA MVP Awards. He also holds numerous records for three-point shooting. Stephen Curry’s skill and precision in the sport has attracted countless fans from around the world and a large social media following of over 30.4 million and counting.

If you would like to learn more about what we can do for you, please feel free to contact us!

Thinking of booking Stephen Curry for a brand endorsement, corporate event, private party, media appearance, and so on? We’re here to help!

Talent Connect is a top-tier talent booking agency in Toronto Canada with a growing pool of celebrity contacts.

Even though we do not directly represent our contacts, we have the means and expertise to assist you in effectively connecting with Stephen Curry’s agent or Stephen Curry’s manager.  In addition, we can also design custom marketing campaigns and strategies for your business, involving the influential personality that you choose.

With our swift and hands-on service, you’ll be able to promote your business like never before.

Stephen Curry was born on March 14, 1988, in Akron, Ohio, United States. When Curry was born, his father, Dell Curry, was still a member of the Cleveland Cavaliers team. But as Curry grew up in North Carolina, his father spent most of his career playing for the Charlotte Hornets, a team that also competes in the NBA. Curry and his brother would often attend their father’s games.

After Dell’s retirement, the family settled in Charlotte, North Carolina and Curry went to school at Charlotte Christian School. There, he played for the varsity team and led his team to three conference titles and three state playoffs.

After finishing high school, Curry went to Davidson College after being aggressively recruited since his tenth-grade year. While playing for the Davidson Wildcats, Stephen Curry finished the first season taking the lead in the Southern Conference scoring with 21.5 points per game. He would be able to take this lead yet again during his sophomore year. It was no surprise that he was named as the Most Outstanding Player of the Midwest Region during the 2008 NCAA Tournament.

In 2009, during Stephen Curry’s junior year, he had scored an amazing total of more than 2000 points. During the same season, he was the NCAA scoring leader. It was clear that Stephen Curry was determined to make a name for himself and he had succeeded to do so, impressing everyone with his consistently exemplary performance. Though Curry opted out of his senior year, he expressed that he still planned to earn his degree later on.

In the 2009 NBA Draft in June that year, Curry was selected as the seventh overall pick by the Golden State Warriors, a team to which Curry shows loyalty towards even up to this day. During his first season, Curry appeared in 80 games with an average of 17.5 points. And for the months of January, March and April, Curry was named Western Conference Rookie of the Month and was also unanimously selected in the NBA All-Rookie First Team.

In the next season, Curry appeared in 74 games and ended with an average of 18.6 points. In May 2011, after exemplifying integrity and fair play along with top-notch athletic ability, Curry received the NBA Sportsmanship Award. However, around the same time, Curry also needed to undergo surgery for an injury to his right ankle. But then, Curry was able to show true resilience by bouncing right back in the following 2012 – 2013 season. He appeared in 78 games and ended the season with a career-high average of 22.9 points. Through the following years, Curry would be well-known for his precision and consistency in playing the sport.

So far, Stephen Curry is a three-time NBA champion for the years 2015, 2017, and 2018. He also received two NBA MVP Awards for the years 2015 and 2016. And beginning with the year 2014, Curry had consistently been in the NBA All-Star Game. There is no question that Stephen Curry will continue to amaze the world with his unparalleled skill, passion, and overall resilience as one of the most-respected and most-talented basketball players in the NBA.

How can I book Stephen Curry?

Through Talent Connect’s complete, hands-on service, you will be able to book top athletes, celebrities, and influencers for different kinds of engagements – such as media appearances, brand endorsements, corporate events, private parties, speaking engagements, and more.

If you are looking to book Stephen Curry, one of the biggest names in professional basketball, we can help!

How can I get in touch with Stephen Curry for media inquiries?

Getting in touch with high-profile athletes can pose some challenges – such as busy schedules, unintentionally missed/spammed messages, false or outdated contact information from an unreliable source, and so on. If you are trying to reach out and not getting a response, it’s likely that you’ve run into one or more of the above gaps – and it’s a shame because most celebrities are actually open to various media inquiries if they are aware of it.

Our expert team can help you get past the above time-consuming obstacles and effectively book athletes like Stephen Curry for virtual events, podcasts, TV appearances, magazine feature articles, and more!

Generally, the management of top celebrities like Stephen Curry is receptive to opportunities from businesses and organizations. Depending on their direction, they may actually be looking for more brand endorsements or media appearances for their celebrity athlete. However, getting in touch with the management of top athletes can be challenging. The main challenge is being able to get your message through the right channel.

So if you need to contact Stephen Curry’s agent or Stephen Curry’s manager, our team of professionals can make it happen! We have the expertise and the vast network to establish the connection you need.

Additionally, we offer a packaged service that you won’t find anywhere else.

What is Stephen Curry’s booking fee?

Stephen Curry’s booking price can depend on a variety of factors, such as:

Additionally, there may also be additional costs depending on the nature of your engagement – such as travel expenses, hotel accommodations, and transportation costs for going to the venue location. Our team can lay out all these costs so that you don’t encounter any surprises. We can also negotiate on your behalf in order to get the best booking rates.

For you to get started, all you need to do is tell us more about the kind of engagement you are looking to arrange (e.g. an event, party, media appearance, brand endorsement). We’re looking forward to hearing from you!