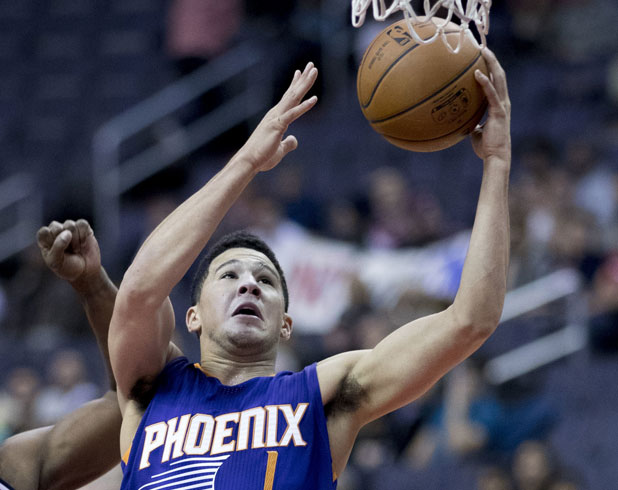 Devin Booker is an American professional basketball player for the Phoenix Suns of the National Basketball Association (NBA). The leading athlete was drafted to the team during the NBA Draft of 2015. Devin Booker is a brilliant addition to the world of sports who solidified his status as a basketball star with a myriad of records. To name one, he became the youngest player to score over 60  points in a game in 2017. Two years later, at the age of 22, he set another record by becoming the youngest player in NBA history to score consecutive 50-point games. Additionally, he received his first NBA All-Star selection in 2020.

The basketball industry is brimming with gems, but Devin Booker is one of the most dazzling ones who can propel your events and campaigns to new heights.

Looking to book Devin Booker for your events or campaigns? Talent Connect is here to make it happen for you! While our agency does not directly represent our diverse pool of celebrity contacts, it is our team’s objective to assist you in making contact with Devin Booker’s agent or manager. Talent Connect is dedicated to helping you to achieve promotional success for your business, product, or services via celebrity endorsements from famous personalities, like Devin Booker. You make the campaign, and we’ll make the connection. 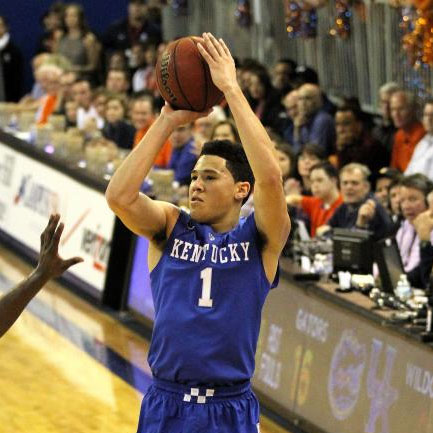 Devin Armani Booker, also known by his professional name, Devin Booker, was born on October 30, 1996, in Grand Rapids, Michigan, USA. He initially played basketball with his team at Grandville High School in Michigan before moving to Mississippi to live with his father, Melvin Booker, who was a former professional basketball player himself. During that time, Devin Booker enrolled at Moss Point High School and made history by scoring more points than his teammates did combined. By the end of his first season, he averaged 22.7 points per game. Demonstrating such high calibre skill at a young age, it became evident early on that basketball was written in the stars for Devin Booker.

In 2015, the basketball prodigy was drafted by the Phoenix Suns and broke records by becoming the youngest player to score more than 60 points in a game. Following in the footsteps of his talented father, Devin Booker didn’t waste time in making his mark in the NBA and turning himself into a household name.

In 2019, the athlete nearly set a triple-double with 35 points, a career-high of 12 rebounds, and 9 assists in a nail-biting 100-98 win over the Minnesota Timberwolves. From December 2019 to January 2020, Devin Booker managed to score more than 30 points in seven consecutive games. The astounding streak shattered a franchise record for most consecutive 30 plus games in a row, breaking a record that was previously held by Charlie Scott and Charles Barkley. The basketball magnate was crowned an All-Star on February 13, 2020

Aside from being a master at shooting hoops, Devin Booker is also a champion at giving back. In 2019, The Phoenix Suns superstar has pledged to donate a whopping total of $2.5 million to Suns’ charities over the coming five years. Devin Booker is an athlete who scores on the court and pays it forward in life.

How can I book Devin Booker?

Talent Connect’s objective is to connect our clients with celebrities and athletes, such as Devin Booker, in order to book them for a variety of business engagements, campaigns, and private events. This includes media appearances, brand endorsements, corporate events, private parties, speaking engagements, and more. If you would like to book Devin Booker, one of the most talented basketball players to ever take the court, our team will be happy to make it happen!

How can I get in touch with Devin Booker for media inquiries?

While most prominent basketball players, like Devin Booker, are open to responding to media inquiries, you may encounter a few issues in establishing a successful connection. The most common roadblock is obtaining inaccurate or outdated contact information. That’s why Talent Connect is here to ensure that you are protected from these inconveniences with our quality services and reliable industry contacts. Devin Booker Lillard for a variety of media appearances, such as virtual events, TV appearances, podcasts, non-profit events, speaking engagements, magazine articles, and more!

The management team of athletes is usually very receptive to opportunities from a wide range of companies. However, communication gaps are unforeseeable and can occur at any time. By having inaccurate contact information or catching them on a busy day, messages could easily be overlooked. If you need to get in touch with Devin Booker’s agent or manager quickly and efficiently, our experienced team of professionals can make all the necessary arrangements for you. Talent Connect combines expertise in connecting celebrities to our clients with a vast pool of industry contacts to establish the connection you are looking for. Reach out to our office today for complete booking information.

What is Devin Booker’s booking fee?

Much like most celebrities and athletes, Devin Booker’s booking fees may vary depending on a variety of factors, which include the following:

There may also be additional expenses that are not included in the flat rate. This encompasses components, such as transportation expenses and hotel accommodations. For further information about Devin Booker’s booking fees and schedules, please feel free to reach out to our office.