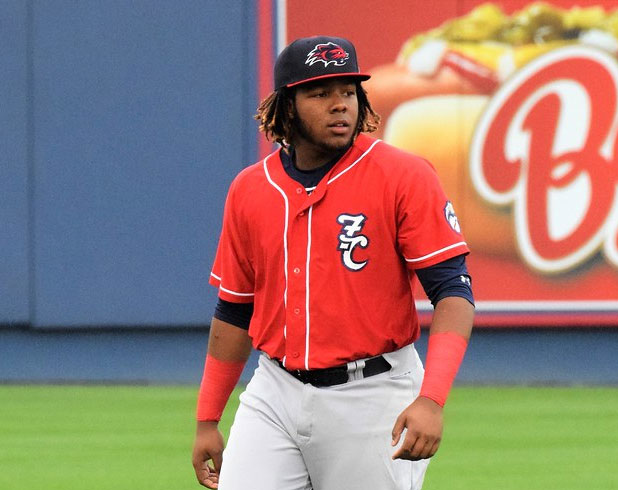 To bring your campaign into full swing, you’re going to need a record-breaking hitter. Vladimir Guerrero Jr. is the designated batter and 3rd baseman for the Toronto Blue Jays. He made his debut in Major League Baseball in 2019. Known for his extraordinary ability in hitting, he currently holds the record for being the youngest Blue Jay in history to hit a home run! His game-changing skills in baseball have earned Vladimir a strong following of 737k on Instagram.

Talent Connect is here to help brands connect with celebrities for endorsements of their business, products, or services. Our team is not a direct representative of the athletes in our vast database, but we offer premier services that will get you in touch with Vladimir Guerrero Jr.’s agent or manager. Associating your company with a well-known athlete can have a highly positive impact on your brand image. We know exactly how much power celebrity endorsements hold and our team will assist you in getting started! 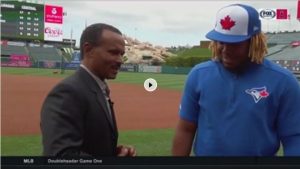 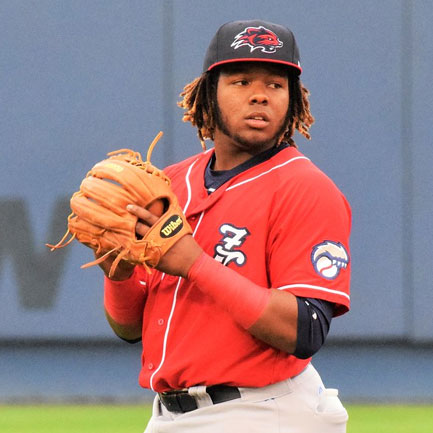 The moment “Vladdy Jr.” became eligible for free agency, he was ranked the top international free agent by “Baseball America”. In 2016, Vladimir debuted as a professional baseball player with the “Rookie Advanced Bluefield Blue Jays” of Toronto. During his time with the team, the newbie minor league player impressed everyone with multi-home run games.

In March 2018, Vladimir started the season with the “Double-A New Hampshire Fisher Cats”. Just two months later, he hit .438 with 9 home runs and 28 RBI. This led to him being named “Eastern League’s Player of the Month”.

With all the impressive skills he displayed, it’s no surprise that he was promoted to the “Triple-A Buffalo Bisons”. In 61 games with New Hampshire, Vladimir hit .402 with 14 home runs and 60 RBI. He was soon named the top prospect in all of professional baseball.

Vladimir Guerrero Jr. was called up by the Toronto Blue Jays in April 2019. This marked his official debut as a Major League Baseball player. It was just a matter of time before he made history and broke records. Just one month later, Vladimir hit his first home-run in the major league during a game against the San Francisco Giants. This resulted in him becoming the youngest Blue Jay in history to hit a home run at the age of 20 years and 59 days. That same month, he became the youngest Blue Jay to win the American League “Player of The Week Award” when he hit four home runs over a 6-game road trip.

During one of his 2019 games, Vladimir managed to hit the ball at 118.9 mph. This set the record for the 2nd highest exit velocity of all balls hit that year by major league batters. As of 2020, he’s the third baseman and designated hitter of the Toronto Blue Jays.

How can I book Vladimir Guerrero Jr.?

Our team can get you in contact with distinguished Major League Baseball players, like Vladimir Guerrero Jr., for bookings like media appearances, brand endorsements, speaking engagements, corporate events, private parties, and more. Reach out to Talent Connect to get started on the booking process!

How can I get in touch with Vladimir Guerrero Jr. for media inquiries?

If you’ve been looking for the right team to make the connection between your brand and Vladimir Guerrero Jr.’s management, this is the place to be! You no longer have to worry about communication gaps caused by false or outdated contact information. Talent Connect will ensure an efficient booking process — free of the hassles usually associated with reaching out to celebrity athletes. To book Vladimir Guerrero Jr. for a wide variety of media appearances like virtual events, podcasts, TV appearances, and magazine feature articles, etc., contact Talent Connect.

Reaching out to high-profile athletes can have its obstacles if you’re not assisted by a reliable source. Getting in touch with Vladimir Guerrero Jr.’s management is made easy with the help of Talent Connect. With our up-to-date contact information, you won’t have to worry about a failure to communicate. To connect with Vladimir Guerrero Jr.’s agent or manager, reach out to our team and we’ll get you through the booking process.

Just like most public figures, Vladimir Guerrero Jr.’s booking rate depends on factors such as:

In addition to the flat booking fee, there might also be other costs that would need to be shouldered as well. These include travel expenses, hotel accommodations, and transportation for in-person events. For more details on Vladimir Guerrero Jr.’s booking fee, contact Talent Connect.