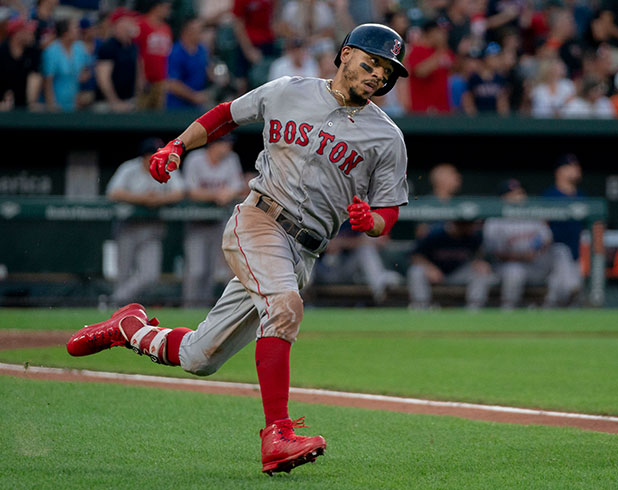 Mookie Betts is a professional baseball right fielder who plays for the Los Angeles Dodgers of Major League Baseball. Initially drafted by the Boston Red Sox 2011, the baseball star made his Major League debut in the 2014 season. During his stay with the Red Sox, Mookie Betts broke records by being the very first player in Major League Baseball to win the Most Valuable Player, Silver Slugger, Gold Glove, Batting title, and World Series within the same season. This 28-year-old sports magnate is undeniably one of the most talented baseball players of his generation, making him the perfect choice for your next corporate event, private party, speaking engagement, or brand campaign.

If you are looking to book Mookie Betts for your events or campaigns, Talent Connect is here to make it happen! While our agency does not directly represent our vast and diverse pool of celebrity contacts, it is our team’s objective to help you get in touch with Mookie Betts’ agent or manager. Talent Connect is dedicated to assisting you to achieve promotional success for your business, product, or services via celebrity endorsements from famous personalities like Mookie Betts. You build the campaign, and we’ll spark the connection. 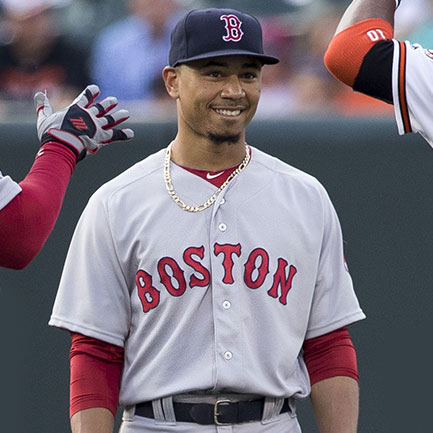 Markus Lynn, more famously known as Mookie Betts, is a professional baseball player who kicked off his athletic career when he got drafted by the Boston Red Sox. Making his debut in 2014, he recorded his first major league career hit against the Yankees starter, Chase Whitley in the fourth inning and hit his first home run off the Cubs’ Carlos Villanueva. He hit his first legendary career grand slam against Rays; pitcher, Chris Archer, during a Red Sox win at Tropicana Field.

Mookie Betts devoted the majority of the 2014 season playing in the outfield. However, it was soon announced that he would be playing second base following the injuries of regular second basemen, Dustin Pedrola and Brock Holt.

Within the 2014 season, Mookie Betts split evenly between AA, AAA, and MLB, while playing 52 major league games. The baseball prodigy scored a whopping 5 home runs and played more than half his innings in the center field.

In 2020, Betts was transferred to the Los Angeles Dodgers and finished the season strong with .292/.366/.562 with 47 runs, 16 home runs, 39 RBIs, a .928 OPS, and 10 stolen bases. En route to the World Series over a three-season period, Mookie Betts managed to make three straight series saving defensive gems in elimination games for the Los Angeles Dodgers in the NLCS against Atlanta. During the World Series clincher, he scored twice and hit a home run.

With such massive success at his young age, there is no doubt about it that Mookie Betts is a sport’s legend in the making.

How can I book Mookie Betts?

Talent Connect’s objective is to connect our clients with reputable artists and athletes, such as Mookie Betts, in order to book them for a vast variety of business engagements. This includes  media appearances, brand endorsements, corporate events, private parties, speaking engagements, and more. If you would like to book Mookie Betts, one of the most renowned baseball players in the world, our team will be happy to make it happen!

How can I get in touch with Mookie Betts for media inquiries?

While most popular athletes, like Mookie Betts are keen on responding to media inquiries, you may encounter a couple of issues in making a successful connection. The most common obstacle is obtaining inaccurate or outdated contact information. Talent Connect is here to ensure that you are protected from these inconveniences with our top quality services and reliable industry contacts. Book Mookie Betts for various media appearances, such as virtual events, TV appearances, podcasts, magazine articles, and more!

The management of celebrity athletes are very open towards opportunities from businesses and organizations. However, communication gaps are unpredictable and can occur any time. By having inaccurate contact information or catching them during a busy time, messages could easily be overlooked. If you need to get in touch with Mookie Betts’ agent or manager quickly and efficiently, our experienced team of professionals can make all the necessary arrangements for you. Talent Connect combines expertise in connecting celebrities to our clients with a vast pool of industry contacts to spark the connection you are looking for. Reach out to our office today for comprehensive booking details.

What is Mookie Betts’ booking fee?

Much like most athletes and celebrities, Mookie Betts’ booking fees may vary depending on a variety of elements, including:

There may also be additional costs that are not included in the flat rate. This includes factors like transportation expenses and hotel accommodations. For more information about Mookie Betts’ booking fees and schedules, please contact our office.