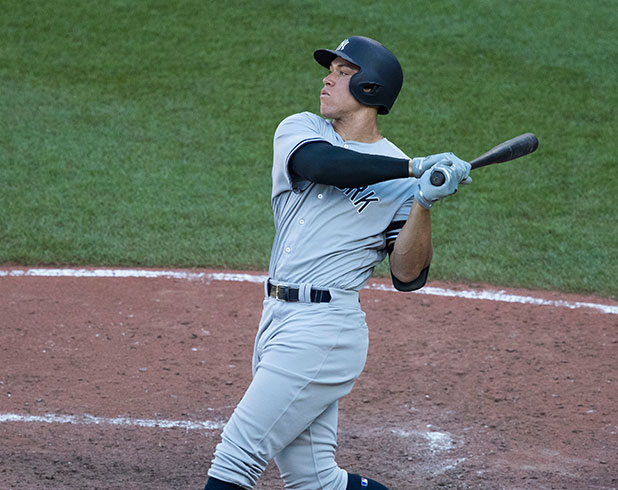 Aaron Judge is a professional baseball outfielder who plays for the New York Yankees of Major League Baseball. He was drafted by the Yankees in the first round of the 2013 Major League Baseball draft with the 32nd overall selection. Being unanimously selected as the American League Rookie of the Year and 2nd place in the voting for the Most Valuable Player, there is no doubting the star power that this 28-year-old athlete holds.

If you are looking to book Aaron Judge for your events or campaigns, Talent Connect is here to make it happen! While our agency does not directly represent our vast and diverse pool of celebrity contacts, it is our team’s objective to help you get in touch with Aaron Judge’s agent or manager. Talent Connect is dedicated to assisting you to achieve promotional success for your business, product, or services via celebrity endorsements from famous personalities, like Aaron Judge. You build the campaign, and we’ll spark the connection.

Aaron James Judge, more famously known by his professional name Aaron Judge, is an American baseball player for the New York Yankees. His baseball career kicked off during his high school days when he attended Linden High School. As a teenager, he already showed expansive and prodigious talent in the field of sports, as he played as a wide receiver for the football team, a center for the basketball team, and a pitcher and first baseman for the baseball team.

His tri-sport endeavour enabled him to set a school record for touchdowns in football, led the basketball team in points per game, and made it to the interscholastic playoffs with the baseball team.

Later on, multiple colleges offered to recruit him for his talent in football, however, it soon became clear that he preferred to follow his path further down the world of baseball.  In 2013, the baseball prodigy was drafted by the Yankees in the first round of the Major Baseball League draft that season.

Aaron Judge’s professional debut was with the Charleston RiverDogs of the Class A South Atlantic League in 2014. He achieved an impressive .333 batting average, a .428 on-base percentage, a .530 slugging percentage, and hit nine home runs.

With his exceptional talent and superlative career, Aaron Judge is on his way to becoming a baseball legend.

How can I book Aaron Judge?

Talent Connect’s goal is to connect our clients with artists and sports stars, such as Aaron Judge, in order to book them for a variety of business engagements and events. This includes media appearances, brand endorsements, corporate events, private parties, speaking engagements, and more. If you would like to book Aaron Judge, one of the most talented athletes in the world, our team will be happy to make it happen!

How can I get in touch with Aaron Judge for media inquiries?

While most premier athletes, like Aaron Judge, are keen on responding to media inquiries, you may encounter a couple of issues in making a successful connection. The most common roadblock is obtaining inaccurate or outdated contact information. That’s why Talent Connect is here to ensure that you are protected from these inconveniences with our quality services and reliable industry contacts. Book Aaron Judge for a vast array of media appearances, such as digital events, TV appearances, podcasts, speaking engagements, magazine articles, and more!

The management team of athletes is usually very open to opportunities from businesses and organizations. However, communication gaps are unpredictable and can occur at any time. By having inaccurate contact information or catching them during a busy time, messages could easily be overlooked. If you need to get in touch with Aaron Judge’s agent or manager quickly and efficiently, our experienced team of professionals can make all the necessary arrangements for you. Talent Connect combines expertise in connecting celebrities to our clients with a vast pool of industry contacts to spark the connection you are looking for. Reach out to our office today for comprehensive booking information.

What is Aaron Judge’s booking fee?

Much like most athletes, Aaron Judge’s booking fees may vary depending on a variety of elements, including:

There may also be additional costs that are not included in the flat rate. This includes factors like transportation expenses and hotel accommodations. For more information about Aaron Judge’s booking fees and schedules, please reach out to our team.